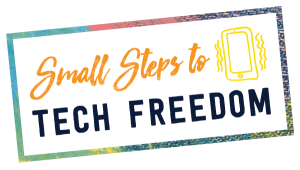 This week we are getting real. I’m going to use a pretty hairy word and ask you a few questions to work out whether you are suffering from a phone addiction.

Ugh. Gross, right? No one wants to be an addict. It’s such a loaded word. But the truth is that the majority of the population is addicted to something. Here’s a definition that I love, and that I’ve found really helpful:

Addiction is the repeated involvement with a substance or activity, despite the substantial harm it now causes, because that involvement was (and may continue to be) pleasurable and/or valuable.

For most of us, when we think of addiction, we just think of the “usual suspects” — like alcohol or substance abuse. Our minds probably don’t jump to our phones…

But they are indeed a source of addiction — and a growing one, at that.

In a recent study, researchers drew similarities between gambling disorders and smartphone addiction. They took the eight official medical criteria for a gambling disorder, and compared them to smartphone use. I want to share those characteristics with you now, so you can judge your own potential ‘addiction’...

1. Needs to use a mobile phone for increasing amounts of time to achieve the desired excitement.

2. Is restless or irritable when attempting to cut down or stop smartphone usage.

3. Has made repeated unsuccessful efforts to control, cut back, or stop smartphone usage.

4. Is often preoccupied with smartphone use.

6. Lies to conceal the extent or involvement with smartphone use.

7. Has jeopardized or lost a significant relationship, job or educational or career opportunity because of mobile phone usage.

Relies on others to provide money to relieve desperate situations caused by mobile phone usage.

Let me be clear, addictions are not cut and dry, and I am by no means a professional…

But when I saw this list, I thought to myself that I covered a good many of them. It led me to investigate the brain a bit more, so I could understand the role of pleasure and how certain hormones are released when we interact with our phones.

If you want to find out more about ‘Mobile Phone Overuse’ there’s lots of good research to check out in this Wikipedia post.

And hey, if the word ‘addiction’ carries too much stigma for you, how about the word ‘dependence’? A lot of professionals use the two words interchangeably. And I’d say for sure that I’ve developed a dependence on technology that goes beyond a healthy use of it for everyday life.

Thing is, when we have an addiction, we need to commit every single day to overcoming it. Our brains desperately want us to do the thing that feels good and easy. It’s about survival for the reptilian part of our brains.

So this week, I want you to start thinking about creating alternative habits. Watch the video below as I share why this is an important thing to do as we reach the halfway point of the course, and you might be finding that following through on the steps has been harder than you intended (and if it’s been easy peasy, POWER TO YOU!).

One of the easiest ways I found to reduce the pleasure of my phone was to turn the screen black and white. Instagram and Facebook aren’t half as appealing in greyscale! And those little red dots? They aren’t super offensive any more.

Not only does this hack make your screen look less appealing (and your Insta feed less enticing!), the lack of colour also means your brain gets less stimulation… making it a simple but powerful way to start rewiring your neural response.

The process for enabling greyscale differs for different models of Android phones, but it's typically accessed via the "Accessibility" menu.

If you’re an iPhone user with iOS 10:

What do you find pleasurable? For as long as I can remember, the end of the day involved curling up in bed with a book. Even through the years of having babies, I’d read a few pages of a book before shutting my eyes.

But with the advent of Stan, Netflix and social media, I began taking my phone to bed to watch TV or scroll my feed. It feels good sometimes, but when it became my norm — and when the hours would tick past with me feeling kind of wired, staring numbly at episode after episode — I knew I needed to stop.

And let’s be brutally honest here: things weren’t looking good in the “bedtime lovin’ department” either. I mean, both partners in bed with headphones on?….. Not super sexy!

But I knew that if I was going to break this habit, the alternative had to feel just as luxurious and enjoyable...

Because as we know, habits can be hard to break, and what is required is REPETITION. So don’t attempt to break an old habit with a one-off event. Like ‘having an aromatherapy bath’. Sure, if you’re the kind of person who can do this every night, awesome! But for most of us, that would be a once a week (or, um, once a year!) kind of thing. Which means it’s not the *best* option if we’re serious about changing a habit.

If you want switch up how you do nights, choose a new way to fall asleep. And make it enjoyable, and something that’s sustainable and realistic for you.

For me, going back to books has been key.

It’s crazy how excited I am about reading novels again. That delicious feeling of sinking into a good book… there’s nothing like it. (That said, I am also looking forward to bed these days for completely different reasons... wink, wink! Which is another [welcome!] side effect of my new habit.)

This new routine has also shown me how tired I’ve actually been, for months (years?) on end. Now, when I’m reading a book, I can barely keep my eyes open for more than a chapter. But in the past, I would have easily watched an hour or more of Netflix... and all the while, been completely numb to what my body was *actually* longing for: some good old-fashioned zzzzzzz’s!

So to sum up, I created a new habit around bed time. And it feels great. It’s not impossible and in no way do I feel like I’m ‘missing out’. I feel so free!

This week, your task is to create your own delicious, freeing nighttime routine.

Good luck this week. Know that I am cheering you on and celebrating every small step you take on this journey...